If you read this I expect I've probably already let you know that No Tomatoes is being rerun at the mo, but you never know...

You can catch it via the iPlayer these days at
http://www.bbc.co.uk/iplayer/episode/b007zh4d
if you're interested.

It now comes with a free picture of a cute dog, which I like to think is progress.
Posted by IZP at 18:28 2 comments:

It must be true... probably.

Bill Mitchell, voice-over artist, owned the booming baritone who told us Carlsberg was “probably” the best lager in the world, and that Denim was “for men who didn’t have to try too hard”. This sharply-angled documentary explores a bygone age in the creative industries embedded in bravado and macho insecurity – a world created by men for men."

Halliwell and Orton as depicted in the film Prick Up Your Ears. 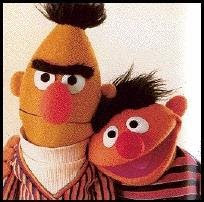 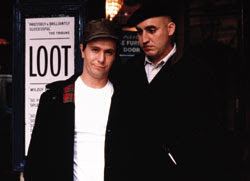 Labels: Are they perhaps?

Ian was listening to the build up tapes for Delia Derbyshire's Blue Veils and Golden Sands.

Ian was listening to the build up tapes for Delia Derbyshire's Blue Veils and Golden Sands.

The winner receives a limited edition Golden Hare by Lindt and Kit Williams.

Honestly people, the clues were all there.

There's finally been a press release about this great, great collection.

Eddie Mair gets giddy on the PM blog
The Telegraph uses the word 'posterity'.
The Times muses on 'irrevocable decay' and calls Delia a 'hopeless alcoholic'.

That probably tells you something.
Posted by IZP at 08:27 4 comments:

It's getting silly now.
Positive noises about my second Radio 4 documentary pitch, which hasn't been picked up due to a shortage of slots suggesting the commissioner really liked it and that it may be picked up either 'out of round' or in the next wave of commissioning. Listen to me with all my jargon.

Obviously, we've heard similar before when BBC7 asked us to pitch No Tomatoes 2, pleaded lack of slots, asked us to resubmit next time and by then had gone off it, but this sounds a good grain more hopeful.

Very sad to learn last night that Paul Makin, the writer of the incredible sitcom Nightingales died last week. Paul wrote a lot for Alomo and I was gushing in my praise of him to Allan McKeown just a few months ago while researching my telly book. Get hold of the series if you're a fan of cerebral comedy that's funny peculiar as well as ha ha.
It stars David Threlfall, Robin Lindsay and James Ellis, TV royalty all, and was produced by Esta Charkham who I found utterly charming and very smart at my first and only paid SF convention visit (I've sneaked in the bar of a couple since) Fan Aid North. It's got Brendan from Moreton Harwood in it too.

In further it must be the time of year Radio 4 depresses half the sociopathic and virtually autistic middle-aged men in Britain news, I've heard back about my Afternoon Play.
They've bought it!

Like you should buy Nightingales.
Posted by IZP at 14:32 2 comments:

How are your memories of 1979? If you're old enough to have any I'd suggest- wonky. They're over-detailed in some areas, vague and hazy in others. Without a briefing from an assistant director and a quick look at the clip you're due to recall on the monitor you may struggle.

My memories of 1979, aren't so much about the rise of Thatcher or the specific crapness of being 10 to 11, which is what I was mainly being that year, so much as how brilliant Doctor Who was, which of course with the exception of the 'one brief shining moment'* of City of Death it really wasn't that year.
The other important thing you simply *must* remember from 1979 is the sheer magisterial genius of Amii Stewart's cover of 'Knock on Wood', particularly in conjunction with that video (or promo film as they called them then, even when, like this one, they were soooo totally video), with the fractal howlround cloak and head-dress. It is spectacular. Go to YouTube now, leave a data trail that the Man will use to get at you, go now, do it! I'm ever so grateful to the assistant director for reminding me of it and playing that clip just now.

Oddly, in my messy memories of Doctor Who back then it was a serious drama in which all the science made sense.

Do you see where we're going now, children? I found the conclusion of Doctor Who over the last three weeks to be probably the most satisfying of the recent run.
Now, I know this is heresy, I know the job of a fan is to hate more deeply and more perversely than any untrained casual viewer ever could... and yet, and yet- I really liked it.
I cheered, I laughed, I was moved. Now, I agree the big old planet moving, multiverse mushing plot didn't really hold together too well, but oh, the human stories, the little touches, for some people these things (along with peculiarly lumpen speeches about well-prepared meals) are what Doctor Who is all about. It may have been over-detailed in some areas, vague and hazy in others but it was memorable for me and for all the right reasons... I think.
You see, I reckon we've had Doctor Who with worse science and plotting than this many times, but we've rarely had a series that has touched our little bubbling lumps of heart before.

Hang onto the feeling, it was good, really- it'll never be quite your ideal series I know, because it never was quite that show, really- you're a fan, you've spent decades misremembering it, but hey grab the good and enjoy it now, unbelievably it was the most popular chunk of Who since that shining moment in 1979 when ITV was just light classical music.

I don't mind if you don't like it obviously, with luck you'll have a chance to reappraise it radically in 19 years time, just don't be cross that I did.

Meanwhile, in 1979 nostalgia news, Radio 4 have commissioned my documentary about Bill Mitchell- the gravelly voice over man of choice of the late 1970s and early 1980s.
I'm delighted, I like to have at least one job of work to stick on the CV a year.
I'd quite like to call it The Man Who Wrestled Pumas... Probably, I doubt we will though. Touch wood, eh? Tukka ta tukka ta tukka ta tukka- better knock knock knock on wood... (repeat 'til "earworm'ed)

Radio 4 is now officially allowed to the 1970s now, you know? They're doing plays about punk now everyone involved is elderly and jaundiced like proper Radio 4 folk. There's probably an utterly ghastly ITV1 studio sitcom in doing something about old punks actually, it'd probably have to pilot on Radio 2 first, mind.

** Obviously, in retrospect, I should have had the foresight to name this posting after Nostalgia by the Buzzcocks, that would have been loads better. Everything's better in retrospect- even foresight.
Posted by IZP at 20:38 3 comments: