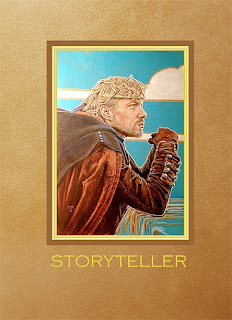 Hello, how are you doing? I'm pleased. Particularly if you just contrarily ignored the accepted social form and told me you weren't doing well. I'm all the more pleased for not having heard it.Anyway that's the niceties out the way. It's time to return to the one sided business of me telling you what I'm up to.

Number 1:
The Alchemists is out there and being reviewed. The response is far more positive than I'd feared. There's a lovely review on Amazon.co.uk, nice ones on Sci-fi Bulletin and Doc Oho Reviews, good ratings on Goodreads (I didn't tell you I've dipped a toe in Goodreads, did I?), and some others scattered around that are more measured. It was always thus.

One disappointment a couple of people had is that it wasn't a play about Doctor Who fighting the Nazis and it wasn't darker in tone. I understand, that but in the end I wrote the play I could and a grim piece about fighting the Nazis wasn't the story I felt I could write. Most of the reasons why are about Doctor Who.
Firstly, in a Companion Chronicle for Susan alone (and there are sensible historic and dramatic reasons for making her the solo companion), I couldn't really make the early Doctor the straightforward hero that kind of story would require.
Secondly, the Doctor Who licence is for family appropriate entertainment (the treatment of the Suffragist and Suffragette prisoners in the play The Suffering is the example I'm always reminded of, of real awful history that needed toning down to be acceptable for Who), so any more brutal content, and it's a brutal history, would be tricky to cover. There is darkness in The Alchemists of course, but most of it is beneath the surface. There are things our unworldly narrator sees and reports without understanding that are awful...
Thirdly, I personally feel Doctor Who has presented a bit of a cartoon World War II in recent years that I'd not be entirely comfortable about adding to. For me, and for the flavour of Doctor Who I was writing here, David Whitaker's mention of the impossibility of killing Hitler in the prologue to The Crusaders novel sat better than his comic TV appearance in 2011's Let's Kill Hitler. I wanted to deal with real history on a more human scale, and all the history in the play is true. Even the somewhat bizarre and fantastical McGuffin was a real plan to save Germany from post-World War I ruin. My gut feeling is if you want Doctor Who against inhuman Nazi monsters, you already have the Daleks.

Number 2:
A little over a year ago, a writer friend of mine died, sillily young, and we've put together a book in his memory and to aid people with Cystic Fibrosis, the condition he lived with which led to his early death. You'll be able to buy it as an ebook here soon, with a hard copy available after that.
It's a book written by people he knew, liked, had worked with and others he'd not met working in the same realms of mind-bending fantasy, whimsy and creepy that he did. Not surprisingly, there will be a few names in there Doctor Who fans of a more literary bent know.

It's called Storyteller- A Found Book and it's for Matt. I've written one story and I like to feel I had a small hand in another because I brought the authors together.
The notion behind it is rather fun, it's a whole list of "other titles you may enjoy" from the back of a genuine old book, except now those titles have had to detach themselves from their old stories and make themselves new ones from scratch. Here's the content listing...

Everyone's written these stories for nothing and it's for a great cause.

Number 3:
Just over a week ago I recorded a piece with Matthew J Elliott, the British writer of American radio, mystery fiction expert, and quickfire gag man who I've come to know through a mutual friend. It's for the US company RiffTrax and should soon be available from their website, I'll let you know when it is. It's a comic commentary to accompany a movie. If you know the series Mystery Science Theater 3000 you know the kind of thing it is already. If not, think of it as a director's commentary almost entirely composed of gags, that sit on top of a film but doesn't prevent you following it. It's an extra layer of enjoyment, which to be honest this particular film needs. It's an odd little piece called King of Kong Island which includes many peculiar pleasures and delights but you really do need a bit of help if you're going to watch it all the way through.

Number 4:
I have been announced as doing some more Doctor Who! Next year, I have a 4 episode audio adventure coming out for the wonderful Maureen O'Brien and Peter Purves, and a really smashing guest cast which is yet to be revealed (though one of them has actually announced their involvement on Twitter). It's called The Bounty of Ceres and is an attempt to imagine the 60s TARDIS crew in something approaching the hard SF of Arthur C Clarke. Writing it, I deliberately imagined which bits would have to have been done on film or using Kirby Wires or would just have looked awful on the TV budget of the day. Then, I wrote them anyway, knowing on audio they'd look amazing. You can pre-order that one here.

Right, I'd better go and make some other things for you to buy or not. See you soon!
Posted by IZP at 10:25 No comments: