Just popping up very briefly to say I've enjoyed reading responses to my Doctor Who story The Revenants online but there's been a suggestion a couple of times that it contradicts the following TV story The Rescue by adding too much time between The Doctor's farewell to Susan and that story, and, you know what, that's probably the one criticism I'd disagree with.
You see, if you go into the expanded fiction, there are already a full novel and at least four short stories in that gap and even if you don't bother with the books, there's already been some kind of gap. The Doctor has changed cravat. That's how mind-bogglingly long the break is.

The dialogue in The Rescue taken to put this story close to its TV predecessor has the Doctor briefly expecting Susan to with them in the TARDIS and then Ian and Barbara discussing that moment later on.
Ian says "all the old associations are still in the Ship" and they can't expect the Doctor to "say goodbye to Susan and forget her the next minute".
That's the nearest we come to a problem- how you choose to interpret that idiomatic expression. Yes, I imply a lot longer than minutes have passed in my story but I hope I've also hinted that the length of time the Doctor will remain emotionally involved with his travellers is surprisingly long and that Ian and Barbara have come to realise that.

I've actually tried quite hard to tie into the beginning of The Rescue. My story ends with the Doctor back in the TARDIS after some time from it, back with "the old associations" for the first time in years and deliberately prefigures the shared humorous glance between Ian and Barbara after the Doctor warns them not to open the TARDIS doors while in flight in their opening scene. I've even suggested an origin for that oh-so-mysterious new cravat!
I absolutely agree that David Whitaker envisaged no gap for new adventures between these TV stories when he wrote The Rescue, but I do think there's a gap there to exploit (enough of us already have), and I hope you'll forgive me making Ian's remark a little woolly retrospectively to slide another story into it.

Anyway, in the end it's all interpretation and it's all pretend. Thank you to all of you who've taken the time to listen to the story and comment on it, I've found everyone's views interesting. I hope those of you who disagree with my reasoning here can at least understand it.
Posted by IZP at 18:26 2 comments:

They Should Have Called the Magazine Ian

Doctor Who Magazine 448 is now out in the UK at least (though I see at least one Australian seems to have already got access to it), with contents including Ian Chesterton, Ian "Chunky" Gilmore and a few words from me, as part of a feature by Cavan Scott on Big Finish audio-drama Counter-Measures. Amusingly, we writers seem to have said a few quite similar things, so poor Cav has had to create a couple of relay quotes of us almost continuing the same thought at one point. 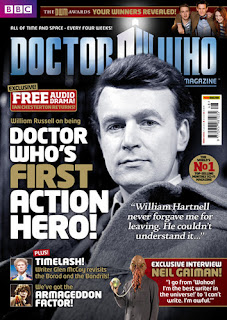 It also contains the code to freely download an audio drama I wrote for Big Finish last summer called The Revenants (the individual episode titles for those curious are, rather prosaically, "The Marsh-Wains" and "The Wissfornjarl").

Brilliantly, there are already some listener created covers appearing! 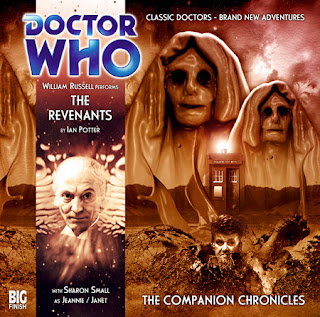 The one above by Nick Giles is my current favourite.

Gratifyingly, response to the play seems to be broadly favourable so far, though obviously you can never please everyone. A few listeners seem to found the story a bit straight-forward, a couple of others seem to have missed the implication of the ending so I've clearly not got everyone on board, but hopefully there's a good few people in-between who felt neither short-changed or under-informed.
It's deliberately quite leisurely and 'literary'- William Russell is such a lovely reader it's daft not to try to use that, and I tried to slightly mimic the slow-building almost John Buchan style of David Whitaker's first person Ian novelisation Doctor Who in an Exciting Adventure with the Daleks, and, I hope, reflect some of the style of early TV Doctor Who which I always feel is much more about suspense than action.

I'm really pleasantly surprised to read some people found it scary, particularly as I was yelping like a complete wuss at the film The Awakening last night, a really rather controlled and old-fashioned ghost-story. I've never thought of myself as a spooky writer so it's particularly nice to see I've caused a few shivers down spines here and there.

I'll talk more about the story in a few months when everyone who wants to hear it probably will have (apparently it can take around 3 months for Doctor Who Magazine to reach all the countries it sells to), but as a tiny taster I'll let you know now that I spotted halfway through writing that there was potential for a small continuity clash with an old Doctor Who prose story that's now out of print called Set In Stone. For that reason I tweaked a late speech slightly so it fits with the events of Set in Stone if you know it but hopefully still makes sense if you don't. I doubt most people would care about this or even notice usually but I'm always aware that the people who do notice really do care a lot so it's worth seeing if you can address these issues where you can. Expect more tedious stuff like that in early September.

You should buy the magazine, you know- me, Glen McCoy and Neil Gaiman all sharing our wisdom in a single volume. That's special.
Posted by IZP at 14:58 2 comments: