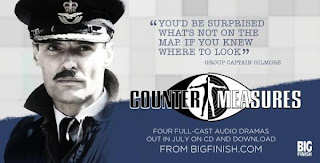 It's here at last, the first four instalments of science fiction thriller, Counter-Measures were released on Thursday!  It's a series of audio dramas from those lovely people at Big Finish that lives somewhere in between the BBC's 1950s Quatermass and 1970s Doomwatch series and, despite being a Doctor Who spin-off, it requires no Doctor Who knowledge whatsoever.  Our heroes are two scientists and an RAF captain who were caught up in bizarre alien goings on with the Doctor in 1963 and have now been reunited in a government funded team investigating the odd.  It's gritty and witty, action-packed and tense, has an utterly exemplary cast and sounds beautifully 60s.
Here's an audio teaser...  The Big Finish Counter-Measures preview.
The series has had a gratifyingly great response so far, with lots of lovely comments already.  Mine (pictured below) is episode 3 and the whole boxset is eminently buyable right now, and as if 4 hours of top-notch drama isn't enough you get an hour of the creators talking about it on a bonus disc too.  Imagine!  Whole minutes of me chunnering with little thought or preparation but spoken aloud not typed.

You can be one of the series' eminent buyers right here!  Do it now, before the planet is doomed.  While you're there, you might also want to pre-order this, a Doctor Who story by me.  It's out next April so only order it if you think we're just a bit doomed and will make it to next year, or think we're so doomed you may as well just throw all your money away now.

I imagine there's been a lot of talk in the recent obituaries of Eric Sykes about his silent or at least silentish works from The Plank to The Big Freeze, but to me they're not the core of his work. As well as being a gifted and shrewd physical comedian, Eric was a writer and a prolific one.
He wrote comedy for all the greats of his age- Frankie Howerd, Tony Hancock, The Goons, as well as vast quantities of Educating Archie, the radio hit of its day, long before penning his own hugely popular TV sitcoms Sykes and a... and Sykes. It's not over-stressing things to say British comedy was reshaped by him. Without Eric there'd have been no Associated London Scripts, and without Associated London Scripts there'd be hardly anything worth having.

In some ways the silents represent Eric's weakest work because they fall back on fairly broad and sometimes rather hackneyed comedy and some star names that can sell them, and the reason for that is that they weren't scripted, so much as put together as loose scenarios and then made up as they were shot. I think it shows. Eric's forte was in sketch and sitcom structure rather than film plotting, they don't really build, and the lack of organisation and troubled production that lead to definitely comes through on later entries like The Big Freeze. It's the work of a man who could come up with ideas quickly and plentifully and get away without structuring them too much, starting to struggle. The Plank is wonderful but it let him get away with a working method that brought diminishing returns.

Go to Eric's scripting work for his true genius. Seek out his Frankie Howerd monologues and his 60s TV work in particular. The BBC DVD The Best of Sykes does a fair job in giving you a flavour of the latter alongside his more often seen 70s series. The Network Sykes DVD will give you an even better idea of his 70s work and a hint of just how fraught it all was behind the scenes.
Eric wasn't a complete saint, but who is? He could definitely be intolerant and definitely held grudges as the regrettable absence of any mention of his long time manager Beryl Vertue in his autobiography attests, but he was undeniably brilliant.

I was lucky enough to spend several hours with him a few years ago, interviewing him with an audience and later dining with him, my wife and his agent, Norma. He was a dream interviewee, I was able to ask him a few comedy anorak questions and cue up some stories I was sure he'd get a big response with, and away he went, flying- a man who could hardly see or hear making hundreds howl with laughter. He was clearly lifted by the adrenaline, the applause and our love.
He was charming afterwards at dinner too, if occasionally indiscreet in that way only a rather deaf man who's known hundreds of famous people very well can be, but also revealed a little more of the more complex man behind his cheery, always on stage persona. The bottom line is he was lovely.

He was magnificent, you know.