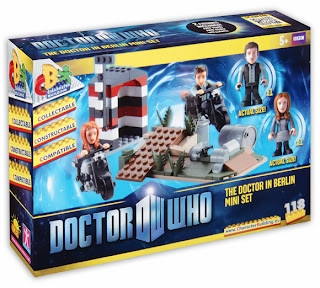 Yes, Doctor Who - The Alchemists is out! I can hardly believe it, it seems a long time since I wrote it. This may be because it is.
Anyway, I thought some of you might be interested in some of the things I used researching it.
There's more than listed here, Wedekind's Lulu plays and Pabst's film of Pandora's Box for example which I think have a homeopathic influence on the play, but nothing a sane person could spot.
There's also a bunch of internet bookmarks on an old laptop, covering the Kaiser Wilhelm Institute, old railway lines, the rise of the Nazis and how Aleister Crowley and Christopher Isherwood were connected amongst other things. All the kind of stuff I imagine gets you interrogated at airports...

Books
Germania, Simon Winder. An opinionated, personal and very readable guide to the geography and history of Germany.
When Money Dies, Adam Fergusson. All you ever wanted to know about Weimar hyper-inflation and a little more besides.
Mr Norris Changes Trains, Christopher Isherwood. A fictional account of his life in Berlin.
Goodbye to Berlin, Christopher Isherwood. A slightly less fictional account of his life in Berlin.
Little Man, What Now?, Hans Fallada. A simply and poignantly told story of ordinary life in the Germany of the early 1930s.
The Wages of Destruction, Adam Tooze. A thorough, detailed examination of the economics underpinning Nazi Germany, which I found the opening chapters of very useful.

TV
Heimat, Edgar Reitz. A beautifully told saga of modern German history told through the lives of people in the fictional village of Schabbach. I just looked at a couple of episodes this time, but it's really a masterpiece of TV you should let roll over you.
Berlin Alexanderplatz, Rainer Werner Fassbinder. An extraordinary bit of television based on Alfred Döblin's novel of the same name, set in late 1920s Berlin. It's deliberately slow paced, and explodes into an astounding allegorical vision which not all viewers are quite prepared for at the end, but it does amazing things along the way
The Nazis- A Warning From History, Laurence Rees. A hugely important BBC documentary series, given incredible power by the first person testimonies it features.
Christopher and his Kind, Kevin Elyot. A dramatisation of Isherwood's biography, beautifully directed by Geoffrey Sax and starring Matt Smith as Isherwood and Toby Jones as Gerald Hamilton, the inspiration for Isherwood's Mr Norris.

Films
Kuhle Wampe, Bertolt Brecht. A short film dramatising the plight of the urban poor in Berlin and showing the radical alternative that many turned to. Made in 1931, it was invaluable for first hand social detail.
Doctor Mabuse- The Gambler, Fritz Lang. This film was made ten years before the period I was setting my story in, but I found it useful for tone. It's absurdly long by modern standards but it has two or three wonderful scenes and beautifully dramatises the paranoid notion of a shadowy figure mysteriously manipulating gambling, crime, economics and ordinary people for his own ends.
M, Fritz Lang. Absolutely in the period I was using and again great for social detail. There's a constant sense of fear below the surface. If you've not seen it, you really should do for Peter Lorre alone.
The Testament of Doctor Mabuse, Fritz Lang. A sequel to both of the above, and a cracking dramatic ride, with some eerie special effects. The sense of a criminal underground and the accepted belief that it was organised is writ large in all these three films.
Cabaret, Bob Fosse. A 1970s filtered version of Isherwood. It's a loose adaptation of a stage musical adaptation of a stage adaptation of Goodbye to Berlin, so it's gone through quite a few transformations along the way. Still, an extremely moving piece of work.

Radio
The Chemist of Life and Death, Chris Bowlby. Hearing this was what set me thinking about using Fritz Haber as the key to the story. You can still hear it here on the BBC Website.

I think that covers most of it. I'll probably bore you senseless being more specific once the play's been out a while and most people who fancy hearing it will have done.
Posted by IZP at 14:24 1 comment: