So here we are limping to the end of February. We're not quite at the end though. This year we end it with one of those pathetic little leaps we get every four years and are still expected to get excited about, rather like an Olympics.

I'm also, more or less, at the end of a script, it's an interesting place to be- still utterly and stupidly obsessed with something made up, almost at the point where you can let it go, to either plummet or fly from your hands.

There's a kind of hysteria at this stage where proper perspective is more skewed than in any number of those MC Escher prints your maths teacher put around the walls to make you feel like looking back down at your quadratic equations. This is why I'm only capable of writing about writing just now, the last refuge of the self-obsessed before they disappear up their own singularities. 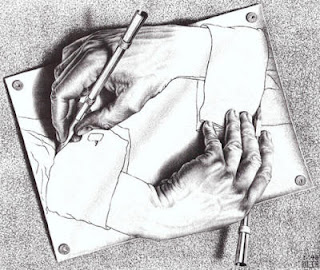 I'm quite proud of this script at the moment, though I'm not blind to its flaws. I was there while I was putting them all in. I think I'm especially proud of it because the initial idea scared me witless, researching it took me to depressing places and yet I still managed to pop a couple of jokes in it. With a following wind what it is it'll be announced properly in a few weeks and the play based on it will be out in the summer. I say "play based on it" because a script isn't the same thing as a play at all, in the same way a map's not an actual place.

Actually, that reminds me of the inordinate amount of time I spent looking at maps (some of places that aren't there any more) to make the geography in this story work, all for what ultimately became maybe three or four glancing references in the finished thing. Some might argue that whole process was unnecessary, just prevaricating before knuckling down to doing the actual proper writing, and I would tell them to 'shush' feeling they were a bit close to a nerve, but I do think it's quite an important part of the writing process- getting to know far more than you will ultimately tell, and only occasionally just arsing around.

You have to accelerate into what you're writing just like you have to slow down at the end. The two main tricks are starting and stopping, which is what I'm about to be doing. Any minute now.
Posted by IZP at 11:22 No comments: