A sleeping city, a storyteller and some simians... Updates! 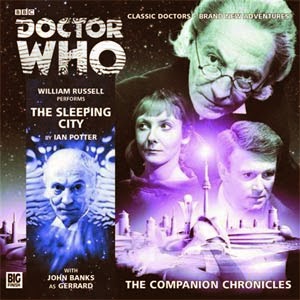 There are some details up now on the Big Finish site for my next Doctor Who play The Sleeping City. They include a rather lovely cover, an intriguing trailer, a little bit of teaser synopsis and the all important 'click on the button and buy it' option. Buying direct from Big Finish naturally gives them more profit than buying their productions elsewhere on-line does, so do please buy from the site if you can.

As the trailer and synopsis reveal, it's a science fiction story about a futuristic city where everyone's being encouraged to think and feel the same way. The story's framed by Ian Chesterton, back on Earth, telling the story of this adventure to an interrogator who, quite understandably, thinks the way Ian, Barbara and one of their pupils vanished from Coal Hill School is distinctly suspicious.

I always thought Ian and Barbara would have a hell of a time fitting back in once they got home. I suspect 60s England changed nearly as much as they did in the couple of years they were away. Ian seems to have learned at least one Beatles song released in their absence, but did they even know Kennedy was assassinated?
After Remembrance of the Daleks was screened, in which we discover Coal Hill School and the missing pupil's home address were overrun by warlike aliens almost straight after the three of them disappeared, I became convinced there'd be a lot of hard questions awaiting them on their return. Reworking an idea that had started as a notion for a Rachel Jenson based Counter-Measures story that never quite gelled, it suddenly occurred to me who'd be the first to be ask Ian those hard questions!

Hopefully, the paranoid 60s Cold War plot and the Science Fiction fable cross-fertilise a little. I guess both strands are about social control and fear of outsiders to a degree. I'm really looking forward to this coming out.

Still available is the collection of short stories for charity in memory of the rather fantastic writer Matt Kimpton, a friend who lived with Cystic Fibrosis but not long enough for my liking.. It is now available in hard cover form as well as an ebook.
It's an entirely not for profit thing done by a lot of smashing authors (and me), that is trying to do a tiny bit of good, so I'd really love it if a few of you bought it.

Still not quite available, because we had to sort out a few tech things with microphones and levels and people being in the same room and things, but coming jolly soon is RiffTrax Presents... King of Kong Island. That's me and writer Matthew J Elliot helping you through a rather challengingly odd movie by talking in the quiet bits and it's something I hope a lot of you will have fun with when it's released. It contains many several jokes and good bits and Northern English accents.

Those are the definitely happening now/soon things. I need to go off and make some other things happen now.
Posted by IZP at 12:54 5 comments: